...the complete Nigerian football portal
Subscribe
A Number of Nigerians Are Flourishing In The Swedish Allsvenskan This Season
Published: August 25, 2020 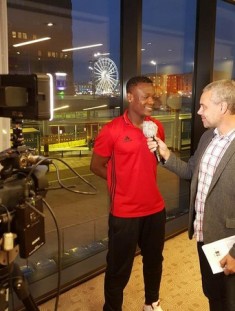 The Super Eagles' squad has players plying their trade across Europe with the Turkish Super Lig, Scottish Premiership, and even the Dutch Eerste Divisie all represented.
However, there have been very few call-ups for Scandinavian-based players in recent years. Despite this omission, there are several Nigerian players currently contracted to Swedish top flight clubs, and it may not be long until Gernot Rohr turns his attention to the Allsvenskan.

Moses Ogbu & Innocent Bonke both featured as Mjallby AIF were held to a [2-2] draw by Malmo FF pic.twitter.com/HWKoMwHNq4

Only Denmark can boast a higher number of representatives in the Swedish top tier, with 13 Nigerians currently getting semi-regular game-time in the Allsvenskan.
Between them, they've played over 7,000 minutes this season, with many of them making key contributions throughout the campaign.
Moses Ogbu, who left Grimsby Town by mutual consent in January has been the biggest beneficiary of a move to the Nordic nation, netting seven times in his first 13 appearances for newcomers Mjallby.
Having started his career in Sweden, the versatile forward is benefitting from his return to familiar surroundings, and he looks set to continue his purple patch over the coming weeks.
Alhassan Yusuf is one of the most sought-after Nigerian footballers in northern Europe. The 19-year old midfielder was born in Kano, before swapping the Tiki Taka Academy for Sweden in search of first team football.
He's been linked with several clubs including Wolves and Sheffield United, and his ability to boss the midfield at such a young age has also seen him scouted by both Ajax and Barcelona.
Although it is still early days for the Goteborg star, he looks set for an extremely bright future in the game.

So unlucky to be playing in a league not worthy of his talents? pic.twitter.com/kz7W5NQx1d

Defensive midfielder Bonke Innocent has also been getting plenty of minutes this season, and will be hoping to lead his current employers Malmo to the Allsvenskan title.
Jon Dahl Tomasson's side are seven points clear at the top of the table, and the Kaduna-born star may get his first taste of Champions League football next season.
European success has been thin on the ground for Swedish clubs in recent years, although Malmo did make it through to the group stages during the 2015-16 campaign.
Unfortunately, they were drawn in a tough group alongside heavyweights Real Madrid and PSG.
The latter are 8.00 fourth favorites in the UEFA Champions League winner odds for the 2020-21 season, and the Allsvenskan outfit will be keen to avoid another clash with the Ligue 1 champions, if they can return to this stage of the competition again next season.

BK Hacken have one of the best defensive records in the division, and credit must go to Benin City-born defender Godswill Ekpolo.

The 25-year old has helped his side keep six clean sheets in their first 16 outings, and with just 17 goals conceded so far, he's played a key role in an extremely well-drilled back-line which has enabled the Gothenburg club to remain inside the top six.

Nsima Peter, Alhaji Gero, and Gbenga Arokoyo are all likely to be involved in a relegation battle this season, but they undoubtedly have enough talent to remain in the Allsvenskan for another couple of seasons.

Further down the pyramid, there is also a wealth of Nigerian talent which is waiting to be unearthed.

Although it isn't one of the more high profile divisions in Europe, the Swedish top flight is proving to be a decent breeding ground for young Nigerian players who are looking to get some regular game-time under their belts.

It is surely only a matter of time before one or two of these talented individuals are given the seal of approval by Gernot Rohr.