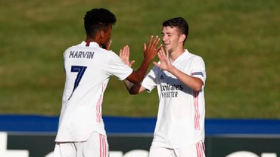 Real Madrid have won the UEFA Youth League for the first time in their history, beating Benfica 3-2 in a thriller on Tuesday evening, allnigeriasoccer.com reports.
Los Blancos and Brazil legend Roberto Carlos was permitted to attend the final and monitored proceedings at the Colovray Sports Centre - Nyon in Switzerland.
Real Madrid's Nigerian winger Marvin Akinlabi was included in the starting lineup for the sixth time in this season's UEFA Youth League and was on parade for 65 minutes.
The Spanish side established a 2-0 lead at half-time, through Pablo Rodríguez and an Henrique Jocú own goal.
Four minutes into the second half, Benfica's Gonçalo Ramos halved the deficit but the two-goal advantage was instantly restored as goalscoring fullback Gutiérrez tapped in, assisted by Akinlabi.
The Real Madrid number 7 sent an inviting ball into the box and it was finished excellently by the arriving Gutiérrez.
With Ramos grabbing his second goal of the game in the 57th minute, Benfica had 33 minutes to save themselves from defeat but Real Madrid managed to hold on to their slender lead.
Akinlabi has joined an illustrious list of Nigeria-eligible players who have featured in the UEFA Youth League final, including Godswill Ekpolo (Barcelona) and Chelsea Academy products Ola Aina, Dominic Solanke and Faustino Anjorin.
Ifeanyi Emmanuel
Photo Credit : realmadrid.com
Copyright ANS
All rights reserved. This material, and other digital content on this website, may not be reproduced, published, rewritten or redistributed in whole or in part without prior express written permission from allnigeriasoccer.com