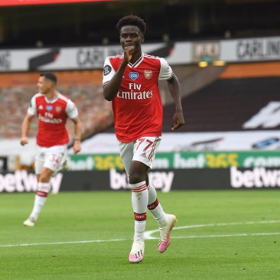 Bukayo Saka has taken to social media to react to Henrikh Mkhitaryan's permanent switch to Italian Seriie A club AS Roma.
The Armenian midfielder cum winger joined Roma on a permanent deal on Monday, August 31st after his contract with the Gunners was terminated by mutual consent.
Henrikh Mkhitaryan initially joined the Giallorossi on loan for the 2019-2020 season and earned himself a permanent move following a string of fine displays, scoring nine goals and providing a further six assists in 27 games.
The former Manchester United and Borussia Dortmund star was the owner of Arsenal's number seven jersey, but with the player set to move to Roma, it was handed to Bukayo Saka for the 2020-2021 season.
Capable of playing as a right and left winger, Mkhitaryan's loan move to Roma improved Saka's chances of breaking into Arsenal's first team last term.
Reacting to Mkhitaryan's Instagram post announcing his permanent move to Roma, Saka stated : "All the best Micki❤️".
Saka wore his new number 7 shirt in Arsenal's win on penalties against Liverpool in the Community Shield last weekend.
Ifeanyi Emmanuel
Photo Credit : arsenal.com
Copyright ANS