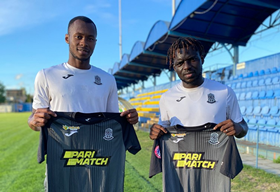 Ukrainian Premier League side Dynamo Kiev officially announced last weekend that Ivorian-born Nigeria U23 international Muyiwa Olabiran will be spending the remainder of the 2020-2021 season on loan at Olimpik Donetsk.
Nicknamed Benito, the 21-year-old has found playing opportunities difficult to come by since his switch to the Ukrainian giants, making only one appearance as a substitute two months ago.
The winger cum striker wasn't included in the matchday squad in Dynamo Kiev's first two competitive matches of the new season against Olimpik Donetsk and Shakhtar Donetsk.
There's every indication that he has been assured of game time at his new club, having started their last two matches, albeit friendlies.
He made his non-competitive debut for Olimpik Donetsk on August 29, playing the first half of their 3-1 loss to Kolos (Kovalevka).
The following day, Benito was also named in the starting lineup as Olimpik Donetsk were thrashed 5-1 by the Ukrainian U21 national team.
Benito, who is provisionally cap-tied to Nigeria, previously wore the colours of Saxan Gagauz Yeri, Lokomotiv Tashkent, FC Luch Minsk and Tambov.
Igho Kingsley
Photo Credit : olimpik.com.ua
Copyright ANS