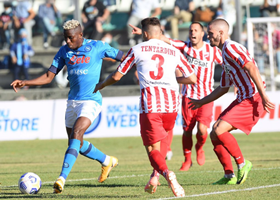 Victor Osimhen was yet again in the news on Friday evening after netting a treble for Napoli in their comprehensive 4-0 victory over Teramo, as the Serie A side continued their pre-season engagements, allnigeriasoccer.com reports.

The Partenopei's summer recruit put his side in the lead just four minutes in at the Stadio Teofilo Patini before making the scoreline 3-0 when he finished brilliantly after been played in by Amin Younes in the 61st minute.

And there was still time for the 21-year-old to bag a treble four minutes later before making way for Fernando Llorente in the 75th minute.

A week ago, Osimhen had scored a hat-trick inside eight minutes as Napoli demolished L'Aquila Calcio 1927 11-0 in a three-team tournament, and has continued to build on his impressive start to life in Naples.
Gennaro Gattuso's side will take in their first competitive game of a new Serie A season on September 20th, when they travel to the Stadio Ennio Tardini to take on Parma.