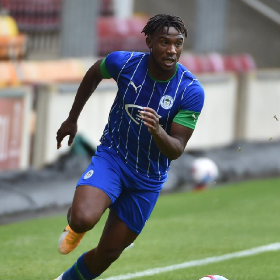 Through a statement on their official website, EFL League One club Wigan Athletic have announced the signing of former Super Eagles invitee Viv Solomon-Otabor on a short-term deal subject to international clearance.
Although the length of contract signed by the winger has not been disclosed, allnigeriasoccer.com can exclusively report that he has put pen to paper on a one-month deal with the Latics.
Solomon-Otabor had been on the lookout for a new club after mutually terminating his contract with Bulgarian club CSKA Sofia.
Scottish Premiership side Motherwell attempted to sign the London-born Nigerian player before the start of the 2020-2021 season but couldn't reach an agreement with the winger.
The Birmingham City Academy product has the experience of playing in the League One with 55 appearances combined during loan spells with Blackpool, Bolton Wanderers and Portsmouth.
Solomon-Otabor will be wearing the number 17 jersey if he makes his competitive debut for Wigan in their League Cup clash against Fleetwood Town on Saturday, September 5.
Ifeanyi Emmanuel
Photo Credit : wiganathletic.com
Copyright ANS