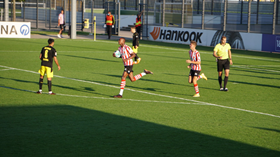 Sparta Rotterdam narrowly lost 2-1 to German Bundesliga giants Borussia Dortmund in their final pre-season game on Monday evening ahead of the new season, allnigeriasoccer.com reports.
Three players of Nigerian descent born abroad took part in the friendly staged at Fußballpark BVB Hohenbuschei in Dortmund, with the trio entering the fray in the second half.
While Super Eagles goalkeeper Maduka Okoye was introduced in the 46th minute, 2003-born center forward Emanuel Emegha and Nnamdi Collins came on in the 71st and 84th minute respectively for Sparta Rotterdam and Borussia Dortmund.
As for Collins, it was his first appearance for Borussia Dortmund's first team since joining the club from Fortuna Düsseldorf in July 2016.
The 16-year-old German-Nigerian traveled with the first team to Bad Ragaz for a pre-season training camp last month and was called up for today's friendly because several of the first team players were away on international duty.
Two quickfire goals from Marco Reus and Immanuel Pherai in the space of three second half minutes gave Dortmund a two-goal advantage but Emegha pulled a goal back eight minutes after his introduction.
Sparta begin the new season against Ajax on September 13 while Borussia Dortmund face MSV Duisburg in the DFB Cup first round the following day.
Igho Kingsley
Photo Credit : sparta-rotterdam.nl
Copyright ANS