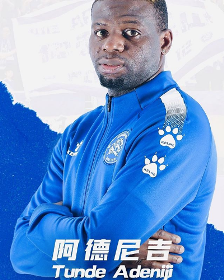 Nigeria international Tunde Adeniji has ended his association with Hungarian club Debreceni VSC after inking a one-year contract with newly-promoted Chinese League One team Kunshan.
The former Sunshine Stars striker has admitted that his national team career could be put on hold with his move to Kunshan as he doesn't see himself getting called up by manager Gernot Rohr with his move to the Chinese second-tier side.
Adeniji pointed out that Manchester United striker Odion Ighalo continued to receive call-ups during his time in China before calling time on his international career because he was a key player of the Super Eagles prior to his switch to
Changchun Yatai in 2017.
On his national team chances following his summer move to Kunshan, Adeniji told allnigeriasoccer.com : "I don't see it happening because when I played in Europe they did not invite me not when I am now in China.
"They invited Odion Ighalo because he was part of the team before moving to China and he was one of their key players."
Adeniji admitted that his transfer to China was not for sporting reasons but all about the money as several European teams explored the possibility of signing him.
"I had interest in my former league, Azerbaijan, Belarus and Cyprus. Moving to China is the best option I have and in football everyone plays for money.
"My target is to do well in my new team and to achieve promotion with the club," Adeniji added.
Former Levski Sofia, Atyrau and Al-Nasr man, Adeniji has chosen to wear the number 25 jersey at Kunshan.
Ifeanyi Emmanuel
Copyright ANS