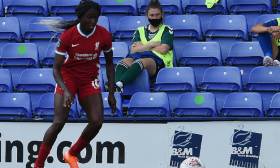 Liverpool FC Women star, Rinsola Babajide has received her first-ever call-up to England's senior national team, the official website of the English Football Association announced on Tuesday.
The London-born striker of Nigerian descent has been named in Three Lionesses coach Phil Neville's 30-player roster for a training camp at St. George’s Park in September.
Babajide will meet up with her teammates on September 15 and will be hoping to be involved in an in-house 11v11 training game behind closed doors three days later.
The 22-year-old is seemingly a fan of Nigeria Women's national team, Super Falcons as she follows the African champions on Twitter, however, she has been lackadaisical in switching her international allegiance from England to Nigeria.
The Anglo-Nigerian received plaudits for her performance over the course of the 2019-2020 campaign, finishing as Liverpool's top scorer with eight goals in all competitions and winning the Player of the Season accolade.

Babajide has earned caps for England's U19 and U21 national teams and was part of the England squad that won the bronze medal at the 2018 FIFA U20 Women's World Cup.
Meanwhile, another London-born striker of Nigerian parentage, Chioma Ubogagu has not been summoned for this month's training camp after pledging her international future to England over Nigeria and United States.
Igho Kingsley
Photo Credit : liverpoolfc.com
Copyright ANS