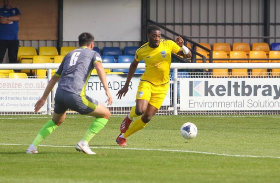 Allnigeriasoccer.com has been told that EFL Championship club Luton Town have taken promising Nigerian youngster Temi Babalolo on trial with a view to a possible move before the close of the summer transfer window.
The 6ft 4in striker cum winger featured in a friendly on Tuesday night as the Hatters U21s team played out a goalless draw with Vanarama National League South side Slough Town.
Aged 19, Babalola recently helped his Concord Rangers team reach the final of the FA Trophy following their 2-1 win against Halesowen Town.
Apart from Luton Town, he is also attracting interest from multiple Championship and League One clubs due to his fine performances and goalscoring prowess at a tender age.
Babalola's key attributes are his physicality, finishing, and aerial prowess.
Before joining Concord Rangers, he wore the colours of non-league clubs Woodford Town scoring 28 goals in two seasons, Brentwood FC, where he scored 6 goals in 10 games and Romford FC, where he scored another 11 goals in 8 games.
Ifeanyi Emmanuel
Copyright ANS