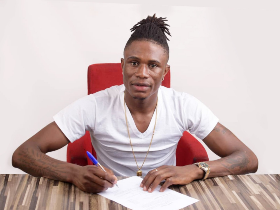 Indian Super League side Jamshedpur have officially announced the signing of Nigeria international Stephen Eze on undisclosed terms.
The former Sunshine Stars and Ifeanyi Ubah star arrives Jamshedpur as a free agent after mutually terminating his contract with Tobol in July 2020.
Eze will be hoping to get his career back on track after missing the whole of the 2020 season due to an injury he suffered in a pre-season friendly and he had to undergo surgery three months ago.
The giant center back admitted that former Bolton Wanderers, Wigan Athletic and Blackburn Rovers coach Owen Coyle convinced him to join Jamshedpur.
"Owen Coyle is a top football manager who I have followed since my childhood when he was with Burnley, Bolton Wanderers and Wigan in the English Premier League," said Eze to the official website of Jamshedpur.
"I look up to him and was elated at the prospects when this opportunity presented. He is clear in his vision and that made my decision easy."
Eze has been allocated the number 66 jersey for the upcoming Indian Super League season.
Igho Kingsley
Photo Credit : fcjamshedpur.com
Copyright ANS