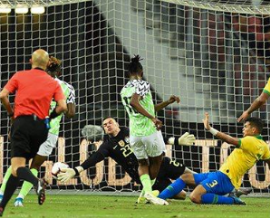 It is all but confirmed that Glasgow Rangers midfielder Joe Aribo will not be named in the Nigeria squad for their upcoming games against Ivory Coast and Tunisia.
The former Charlton Athletic man was not pictured training with Rangers first team on Thursday ahead of the visit of Dundee United, fueling speculation all is not well.
And Rangers boss Steven Gerrard confirmed as much at Friday morning's press conference after revealing that his number 17 faces a minimum of four weeks on the sidelines.
Aribo has not figured for the Light Blues since suffering an ankle injury in training before the Scottish Premiership clash against Livingston, missing three consecutive matches before the international break.
"Joe Aribo has had a setback in terms of his return to training so he's got an ankle strain at the moment, he'll be missing for 4-6 weeks," Gerrard told the national press in Scotland.

"In terms of Joe, it's a big blow. Joe, during pre-season and start of the season, was in magnificent form.

"He's a player we rate very highly here, I'm sure he'll be missed over the next four weeks.

"It's actually good news for us because when he had the setback in the training, there was a situation where he had to go and see a specialist on his ankle problem and there was a chance he might have needed surgery.

"Thankfully he doesn't need surgery and we might be able to get him back in four weeks time so it's actually a positive situation because it could have been a lot worse.

"But he's definitely going to be a blow for us because he's a fantastic player and a major talent and a major part of how we play so it's certainly a blow".
As part of their preparations for the 2021 Africa Cup of Nations qualifiers, Nigeria will take on Ivory Coast in Austria on October 9 while four days later the national team will face the Aigles de Carthage.

Aribo has started the last four matches played by the Super Eagles and got on the scoresheet against Ukraine and Brazil.
Ifeanyi Emmanuel
Copyright ANS