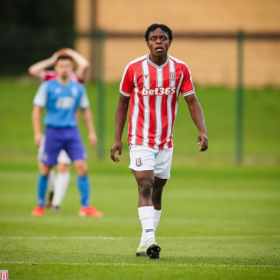 English Championship club Stoke City have been busy in the transfer window in terms of strengthening their Academy squads.
At the end of the 2019-2020 season, the Potters parted company with former Manchester City defender Ashinme Kigbu, who was named in Nigeria's provisional squad to the 2019 FIFA U20 World Cup, but they have added three Nigeria-eligible teenagers to their roster ahead of the new season, including Ifeanyi Udanoh.
Through their official website, Stoke City Academy Director, Gareth Owen has confirmed that midfielder Gabriel Adebambo , 18,  has joined the club from Dundalk in the Republic of Ireland.
"We signed Gabby from Ireland. We agreed the deal at the end of January but with the transfer window closed, we picked it up at the end of the season and stood by it," said Owen.
The second Nigerian teenager who has completed his transfer to Stoke City is David Okagbue who has put pen to paper on a scholarship deal.
"Centre back and a new signing from Ireland. Tall, aggressive defender who is good on the ball also. A good talker and an all-round leader," Stoke City said on Okagbue.
While Adebambo will feature for Stoke City's U23s this season, Okagbue will start with the U18s.
Ifeanyi Emmanuel
Photo Credit : stokecityfc.com
Copyright ANS