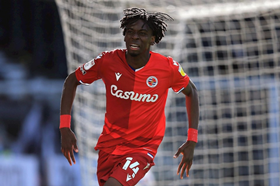 Reading coach Veljko Paunovic has provided an update on the injury suffered by Ovie Eajria in his side's 2-0 win against Derby County in the Championship on Saturday.
In first half stoppage time, the overlapping Ejaria finished a delightful Reading move, bending the ball past the Rams goalkeeper after a lovely back-heel from Lucas João, to give the Royals a 2-0 lead.
Midway through the second half, the former Liverpool midfielder had to be replaced by Super Eagles star Sone Aluko due to injury.
Manager Paunovic has played down the injury suffered by his number 14, saying that he was substituted as a precaution.
In quotes carried by Berkshire Live at the Serbian's post-match press conference, Paunovic stated : "They are battle wounds. He should be fine.

"We have to evaluate his situation but we don't believe it's a big thing."
Former Arsenal schoolboy Ejaria ended his six-year association with Liverpool by completing a permanent transfer to Reading last month.
Igho Kingsley
Photo Credit : readingfc.co.uk
Copyright ANS