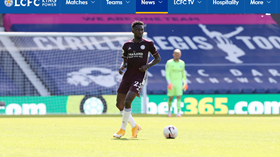 Leicester City have won their opening match of the new Premier League season after an impressive second half performance saw them thrash Semi Ajayi's West Brom 3-0 at the Hawthorns on Sunday afternoon.
The Foxes were under pressure to get up and running this season and they did exactly that, as Timothy Castagne opened the scoring before Jamie Vardy converted two spot kicks.

For the first time in four years, Nigeria international Wilfred Ndidi started as a defender, partnering Caglar Soyuncu in the center of defence against Slaven Bilic's team.


Manager Brendan Rodgers was forced to field Ndidi as a central defender with Jonny Evans, Wes Morgan and Filip Benkovic all unavailable for selection.
Leicester City's two-goal hero Vardy believes the Super Eagles star played brilliantly as a central defender.
Speaking to Sky Sports post-match, the Foxes number 9 said : "We need to keep going, we need to continue working hard in training, taking it into the games.

"Wilf (Ndidi) has played center half today, I think he's done really well, it is not his natural position".
Ndidi's international teammate Semi Ajayi went the distance for the Baggies on his Premier League debut while Kelechi Iheanacho watched proceedings for the bench.
Ifeanyi Emmanuel
Photo Credit : lcfc.com
Copyright ANS