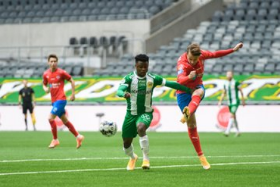 Former Nigeria U17 international Akinkunmi Amoo has made his professional debut for Swedish Allsvenskan side Hammarby, allnigeriasoccer.com reports.
The Sidos Academy product came off the bench in the 65th minute as a replacement for Tankovic in Hammarby's 2-2 draw with Helsingborg at the Tele2 Arena in Stockholm on Sunday afternoon.
Signed in June 2020, Amoo's debut was initially delayed because he could not travel to Scandinavia to link up with his new team due to the coronavirus pandemic.
Upon his arrival in Sweden, the 18-year-old was a non-playing substitute for four games in a row against Norrköping, IF Elfsborg, Sirius and Kalmar, and was left out of the matchday squad vs IFK Göteborg three days ago.
It was not a winning debut for Amoo as Alex Andersson restored parity for the visitors eight minutes after his introduction.
In the provisional Allsvenskan standings, Hammarby are sixth with 29 points, eleven less than table-toppers Malmo.
Amoo's next target is to make his European debut and it could happen on Wednesday when Hammarby face Lech Poznan in the second qualifying round of the Europa League.
Ifeanyi Emmanuel
Photo Credit : hammarbyfotboll.se
Copyright ANS