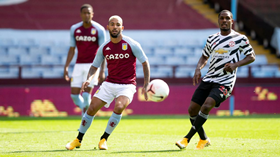 Manchester United coach Ole Gunnar Solskjaer has explained why his strikers failed to find the net in Saturday's 1-0 loss to Aston Villa in a behind-closed-doors friendly at Villa Park.
In a 4-2-3-1 formation, Odion Ighalo started in attack for the Red Devils and lasted 61 minutes on the pitch before making way for Academy product Teden Mengi.
The former Nigeria international saw his penalty claim waved away by the referee shortly after Aston Villa's new signing Ollie Watkins scored the only goal of the game in the 16th minute.
Ighalo almost snatched an equaliser before half time in a frantic goalmouth scramble but Aston Villa defence managed to clear away the danger.
Jesse Lingard, Marcus Rashford, Daniel James and Anthony Elanga were the other attack-minded players that featured for United in their loss to Aston Villa.
Explaining why there was a lack of sharpness in attack, Solskjaer said to Manchester United's official webpage : "We said at half-time that we were playing some great football at times and getting into some fantastic positions, but there was a lack of sharpness and maybe a lack of lungs because it's early doors.
"But we need to be more clinical, we need to score those goals because then you go home happy. Then again, the result wasn't the main thing."
Manchester United host Crystal Palace in their opening Premier League fixture on Saturday, September 19.
Igho Kingsley
Photo Credit : avfc.co.uk
Copyright ANS