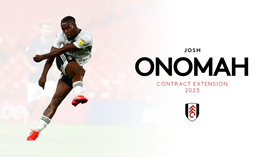 Through a statement on their official website, English Premier League new boys Fulham have announced that Nigeria-eligible midfielder Josh Onomah has extended his contract.
The Tottenham Hotspur Academy product is now contracted to the Cottagers until at least June 2023, with the club having an option to extend the deal by a further year.
Onomah made his full Premier League debut on Saturday as Fulham were beaten 3-0 by Arsenal, taking his appearances in the English top-flight to fourteen since his debut.
Speaking after signing the deal, the 2017 England U20 World Cup-winning midfielder said : "I’m delighted. It’s always been my dream to play in the Prem properly, and I feel like I have the chance to do that here at Fulham.

"Thankfully I’ve been offered a new contract which is amazing, especially after the season we had. It shows the faith and trust that the Club has in me, and that’s what you need as a player.

"From the first minute I walked in I felt the love from the players, staff, fans, everyone involved with Fulham Football Club. I’m just going to keep going, this is just the start."
Onomah joined Fulham in the summer of 2019 and has made 38 appearances in all competitions, scoring four goals.
Igho Kingsley
Photo Credit : fulhamfc.com
Copyright ANS