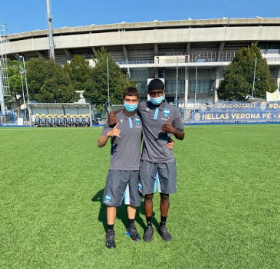 Allnigeriasoccer.com can exclusively report that demoted Italian Serie A club SPAL have won the race for the signature of promising Nigerian defender Abdulmalik Justin Owolabi-Belewu.
An announcement is imminent as the left-footed center back has already agreed a long-term deal with the Biancazzurri following a successful trial.
London clubs Chelsea and Crystal Palace showed interest in Owolabi-Belewu before he traveled to Italy to showcase his qualities but didn't put something on the table.
The 2002-born central defender also attracted interest from League One club Sunderland, OGC Nice, AS Roma and Hertha Berlin.
Born in the United Kingdom, he is eligible to represent the national teams of Canada and England, and was called up to a training camp with the Nigeria U17s last year but did not attend.

SPAL signed Owolabi-Belewu straightaway following his excellent performance in two friendly matches against
Modena and Hellas Verona.
A product of London Youth Whitecaps, his deal with SPAL will keep him at the club until the end of the 2023-2024 season.
Ifeanyi Emmanuel
Copyright ANS