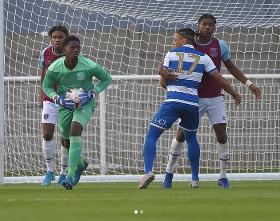 Nigeria youth international Daniel Jinadu watched proceedings from the bench as West Ham lost their opening fixture of the new Premier League 2 season to reigning champions Chelsea on Monday afternoon, allnigeriasoccer.com reports.
Surprisingly in-form Hammers striker Ademipo Odubeko wasn't included in the matchday squad and the same applied to Chelsea duo Faustino Anjorin and Bryan Fiabema.
But there were starts for Jinadu's teammates Tunji Akinola and Oladapo Afolayan, while Josh Okocha remained on the bench for the entirety of the game.
A key member of the Golden Eaglets squad to the 2019 FIFA U17 World Cup, Jinadu spent two years at Chelsea before joining West Ham in December 2017 and signed a scholarship in the summer of 2018.
Another ex-Chelsea schoolboy in Dapo Afolayan had the best chance to open the scoring but couldn't control his header from six yards out at minute 73.
West Ham were made to rue the missed opportunity as Dion Rankine, on as a substitute in the 74th minute, slotted past Anang for the game-winning goal fourteen minutes from time.
The Hammers continue their league campaign on Friday when they face Tottenham Hotspur U23s in another London derby.
Ifeanyi Emmanuel
Photo Credit : instagram.com/daniel.jinadu
Copyright ANS