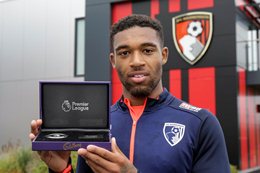 Championship club Derby County are in pole position to sign released Bournemouth winger Jordon Ibe, according to reports.
Football Insider says The Rams are closing in on the signing of Ibe, with the Liverpool Academy product currently undergoing a medical.
The former England U21 international is set to return to Derby County for a second spell, having spent the first half of the 2014-15 season on loan at the Pride Park Stadium, making 24 appearances and scoring five goals.
Ibe also featured in the Championship for Birmingham City during his Liverpool days.
The 24-year-old was not offered a new deal by Bournemouth for the 2020-2021 season due to a loss of form and his poor injury record.
Ibe has not played competitive football since going the distance for Bournemouth in a Carabao Cup clash with Burton Albion on September 25, 2019.
Nigeria-eligible youngsters Josh Shonibare, Festy Ebosele, Osazee Aghatise and Olamide Ibrahim play for Derby County's youth teams.
Igho Kingsley
Photo Credit : afcb.co.uk
Copyright ANS