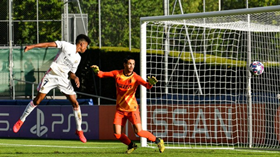 Versatile winger Marvin Akinlabi made his full non-competitive debut for the first team of Real Madrid in their 6-0 rout of Getafe in a pre-season friendly held at the Alfredo Di Stéfano Stadium on Tuesday, September 15.

The French football tactician adopted a three-man attack for the start of the game, with Karim Benzema flanked by Akinlabi and Brazilian super kid Vinicius.

The 20-year-old Nigerian started on the right side of attack, a role in which he impressed during the knockout rounds of the UEFA Youth League last month.


Real Madrid were six goals to the good by the end of the first half, with Benzema netting a poker, while Sergio Ramos and Sergio Arribas scored the other goals.
Akinlabi will habour hopes of making his official debut for Real Madrid before the end of the 2020-21 campaign, having trained with the first team since the start of pre-season.
Last season, he made 26 appearances for Real Madrid Castilla in the Segunda División B - Grupo I, scoring three goals and logged 1,451 minutes.
Ifeanyi Emmanuel
Photo Credit : realmadrid.com
Copyright ANS