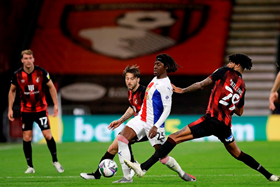 Anglo-Nigerian attacking midfielder Eberechi Eze has made his full debut for Crystal Palace, going the distance as they were beaten on penalties by Bournemouth in the second round of the Carabao Cup on Tuesday, allnigeriasoccer.com reports.
Last weekend, the England U21 international came off the bench for the final ten minutes of the Eagles' opening day win against Southampton, and was handed more game time after impressing manager Roy Hodgson in his first appearance for the London club.
It was goalless at the end of ninety minutes so the winner of the game had to be decided by a penalty shootout.
Dominic Solanke, Philip Billing and ex-Flying Eagles midfielder Nnamdi Ofoborh converted their spot kicks while Eze was also successful from the spot.
Bournemouth eventually won the shootout 11-10 after Begovic saved Luka Milivojević's kick.
Against Crystal Palace, Ofoborh made his first ever start for the Cherries after he was an unused substitute on six occasions, including twice for Premier League matches.
Ifeanyi Emmanuel
Photo Credit : afcb.co.uk
Copyright ANS