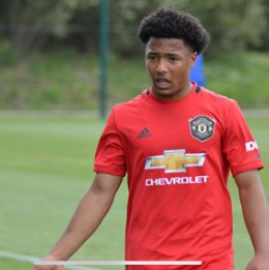 A Manchester United youth team featuring two players of Nigerian descent defeated their Burnley counterparts in a friendly on Tuesday, September 15, allnigeriasoccer.com reports.
Netherlands U17 international Dillon Hoogewerf and Habeeb Ogunneye were on parade as the Red Devils beat the Clarets 3-1.
Shola Shoretire wasn't involved in the friendly having made his Premier League 2 debut against Leicester City the previous day.
Ogunneye, who can play in multiple positions, would be delighted to be given the opportunity to play with a higher age group as he is expected to feature for the U15s in the new season.
Manchester United won the friendly thanks to two goals from Manni Norkett and an additional tally from Christopher Popov.
Neil Ryan's Manchester United U18 side were originally due to face Liverpool in an U18 Premier League North fixture at the Aon Training Complex last weekend but the game was postponed, so they begin their season vs Newcastle United this Saturday.
In his maiden season with United, 2019-2020, Hoogewerf found the net in the U18 Premier League, FA Youth Cup and Premier League 2.
Ifeanyi Emmanuel
Photo Credit : manutd.com
Copyright ANS