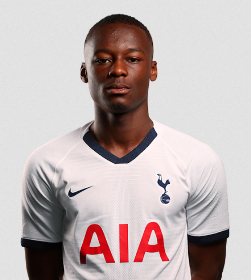 Tottenham Hotspur super-coach Jose Mourinho has included two Nigeria-eligible teenagers in his squad list for the qualifying rounds of the UEFA Europa League ahead of their trip to Bulgaria, where they face Lokomotiv Plovdiv on Thursday evening.
The official website of UEFA has confirmed that 19-year-olds Joshua Oluwayemi and Jubril Okedina have been registered by the north London club for this season's Europa League.
Oluwayemi is among the seven goalkeepers Mourinho can call upon, the others being Jonathan De Bie, Hugo Lloris, Joe Hart, Paulo Gazzaniga, Brandon Austin and Alfie Whiteman.
Okedina and eleven other players classed as defenders have been named to the squad.
The two London-born players of Nigerian descent have been registered on Spurs' List B as they were born after January 1, 1999 and have played for the club for an uninterrupted period of two years since their 15th birthday.
Okedina's first squad involvement with Tottenham Hotspur's first team was in a pre-season friendly against Watford on September 5 but he was a non-playing substitute.
A third teenager of Nigerian descent in Kion Etete has been omitted from the roster as he is not eligible to be registered via the List B, having joined Spurs in the summer of 2019.
Igho Kingsley
Photo Credit : tottenhamhotspur.com
Copyright ANS