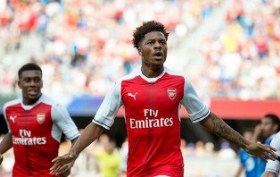 Championship club Middlesbrough are closing in on a deal for Arsenal Academy product Chuba Akpom, according to reports.
Gazzetta.gr says Middlesbrough reached an agreement with PAOK to sign the Super Eagles hopeful before the Greek side defeated Benfica in the third qualifying round of the UEFA Champions League on Tuesday.
Akpom was linked with a switch to West Ham in the January transfer window but it appears the Hammers are set to miss out on his signature with Boro already agreeing a transfer fee of three million euros to sign the striker.
Arsenal inserted a forty percent sell-on clause into the deal taking Akpom to PAOK in 2018, so stand to pocket 1.2 million euros if the deal goes through.
The former England U21 international has Championship experience under his belt, making 52 appearances in total during loan spells at Hull City, Brighton & Hove and Nottingham Forest whilst at Arsenal.
Akpom won the double in his first season in Greece and has represented the club in the Champions League and Europa League qualifying rounds.
The 24-year-old's current contract with PAOK expires at the end of the 2020-2021 season.
Ifeanyi Emmanuel
Copyright ANS