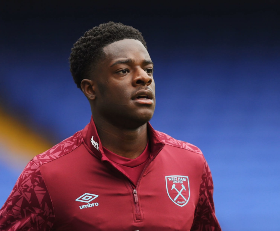 Former Manchester United starlet Mipo Odubeko was undoubtedly the standout performer as West Ham U21s defeated Southend United in an EFL Trophy clash at Roots Hall last week.
The free-scoring striker netted two brilliant goals as the Hammers youth team beat their League 2 opponents 3-1.
According to the official website of West Ham, West Ham first team coach David Moyes went and watched the U21s in their encounter with Southend United.
It is believed that Odubeko caught Moyes' eye as the Scot considered handing him a professional debut in yesterday's 3-0 victory against Charlton Athletic in the Carabao Cup, only for the teenage striker to suffer an injury in the lead up to the game.
Meanwhile, Odubeko has taken to social media to provide a positive update on his injury, saying he is hoping to return to action sooner rather than later.
He posted on Twitter : "Thanks to the fans for all the support over the last weeks. I’ll be back on the pitch soon, doing what I love!"
Odubeko turned down a scholarship with Manchester United prior to his move to West Ham in October 2019.
Igho Kingsley
Copyright ANS