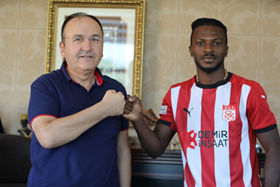 Through a press release published on their official website, Turkish Super Lig side Sivasspor have announced the signing of former Manchester City striker Olarenwaju Kayode following a successful medical.
The Shakhtar Donetsk-owned player will be spending the whole of the 2020-2021 season on loan at Sivasspor.
This is the second consecutive season that the Nigeria international has been loaned out to a Turkish club since joining Shakhtar Donetsk, having spent the 2019-20 campaign at Gaziantep FK, for whom he scored 10 goals in 29 matches while producing seven assists.
On his curriculum vitae, Kayode lists ASEC Mimosas, AFAD Djekanou, Luzern, Heartland, Maccabi Netanya and Austria Wien among his previous clubs.
A member of the Nigeria squads to the 2009 U17 World Cup and 2011 U20 World Cup, he has also represented Nigeria at U23 level and made his Super Eagles debut in a friendly against Senegal in 2017.
Kayode's signing ceremony was attended by Sivasspor's Deputy President Erdal Sarılar on Thursday.
Igho Kingsley
Photo Credit : sivasspor.org.tr
Copyright ANS