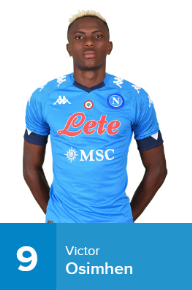 Victor Osimhen will be wearing the number 9 jersey for the 2020-21 season, Napoli have informed via their official website.

The Nigeria international was assigned a provisional squad number, 15, for three pre-season friendlies he was involved in, against  L'Aquila Calcio 1927, Teramo and Pescara.


Osimhen earlier informed allnigeriasoccer.com that he will choose a squad number after the pre-season which is now the case and he is in contention to wear the kit for the first time in the Serie A when Napoli take on Parma in their season opener on September 20.
Last season, former Tottenham Hotspur striker Fernando Llorente suited up with the number 9, and it has also been worn by Gonzalo Higuaín , Gianfranco Zola, Daniel Fonseca, Nicola Amoruso and Simone Verdi in the past.
Llorente has not been allocated a squad number yet, fueling speculation that the Spaniard is not in the plans of manager Gennaro Gattuso for the coming season.
Osimhen wore the number 7 on his back at Lille, while he was given the number 18 and 45 at Wolfsburg and Sporting RSC Charleroi respectively.
He has worn the number 9 for the Golden Eaglets, Flying Eagles, Olympic Eagles and most recently Super Eagles following the retirement of Odion Ighalo.
Igho Kingsley
Photo Credit : sscnapoli.it