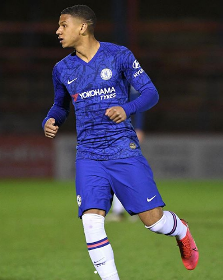 Norwegian-Nigerian striker Bryan Fiabema has scored his first official goal for a Chelsea team, allnigeriasoccer.com reports.
Prior to today's U18 Premier League meeting against West Ham at the Cobham Training Center, the winter signing from Tromso fired blanks on his U18 Premier League and Premier League 2 debuts in the second half of last season.
In his first ever start for Chelsea youth team, the Norway youth international repaid manager Ed Brand's faith by opening the scoring in the 14th minute.
With goalkeeper Kelechi Chibueze in between the pipes, the Blues were 3-0 up going into the break thanks to further goals from Jude Soonsup-Bell and Harvey Vale.
The Hammers pulled a goal back through Freddie Potts just past the hour mark but Tauriainen restored Chelsea's three-goal lead on 77 minutes.
Fiabema made way for Chelsea's fourth goalscorer in the 74th minute while Chibueze went the distance on his full debut in the U18 Premier League.
Exciting fullback Derrick Abu, a first-year scholar, was not in the Blues matchday squad for the second game running.
Igho Kingsley
Photo Credit : chelseafc.com