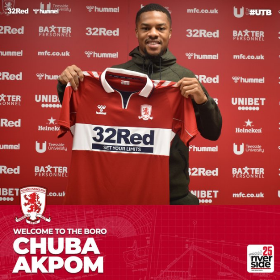 Through their official website, Championship club Middlesbrough have announced the signing of Super Eagles hopeful Chuba Akpom for an undisclosed fee.
The Arsenal Academy product is returning to England two years after he left the Premier League club to join Greek giants PAOK, with whom he won the Super League title in the 2018-19 season.
The former England U21 international has Championship experience under his belt, making 52 appearances in total during loan spells at Hull City, Brighton & Hove and Nottingham Forest whilst at the Gunners.
Commenting on his brand new signing, Boro manager Neil Warnock stated : "I'm delighted to finally have got him.

"He's been my number one choice. I've wanted him for a long time. I'd like to give a big thanks to Neil Bausor for getting it done.

"I told him what we were doing at the club, and right from day one, he wanted to come, and I'm delighted."
Akpom will be in the stands to watch his new Middlesbrough teammates take on Dominic Solanke's Bournemouth at the Riverside Stadium on Saturday afternoon.
Igho Kingsley
Photo Credit : mfc.co.uk
Copyright ANS