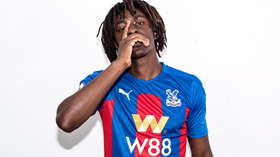 Crystal Palace manager Roy Hodgson is targeting his second consecutive win in this season's English Premier League in the ongoing game against Manchester United, which would be a club record if achieved.
Summer signing from Queens Park Rangers, Eberechi Eze has to wait for his full Premier League debut as he has been omitted from the Eagles starting lineup by the experienced former England manager.
Crystal Palace hero Ian Wright has revealed that he's not surprised that Eze is not in the starting lineup as the attacking midfielder needs time to find his footing in the Premier League.
Speaking on Premier League Productions just before the start of the game at Old Trafford, Wright said : "I don't think it is a bad thing for Roy Hodgson to ease him in. As soon as they can get a couple of more young players in who can really find their feet in the league, the better for them.

"To watch these games, to have a look at what is going on, to find his feet, it's better for Eze because I think he has a massive part to play as the season goes along.

"As soon as Wilfried Zaha can get somebody to help him and can take the burden that he carries so well for Palace, the better it is going to be for Palace."
Eze played the entirety of the loss on penalties to Bournemouth in the Carabao Cup in his first start for Palace on Tuesday, September 15.
Igho Kingsley
Photo Credit : cpfc.co.uk
Copyright ANS