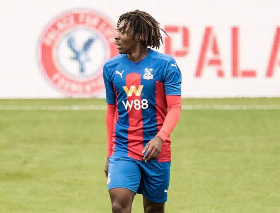 Crystal Palace were 3-1 winners over Manchester United in their Premier League meeting at Old Trafford, with NFF target Eberechi Eze impressing in the victory.
The Eagles set a new club record of winning their opening two Premier League games of the season for the first time in their history.
The talented midfielder came off the bench for Jeffrey Schlupp  in the 75th minute and featured on the left side of a four-man midfield as the Eagles picked their second league victory of the new season.

Signed from Queen Park Rangers this summer, Eze broke on the counter in the 79th minute, but his searching pass to find Wilfried Zaha was intercepted by Scott McTominay to snuff out the danger.

But it was his square ball that led to Palace's third, as the benefactor Zaha held off the challenge of Victor Lindelof to score his second of the game five minutes from time.

Andros Townsend had earlier opened the scoring before Zaha doubled the lead from the spot but Donny Van De Beek, on for his debut from the bench scored to bring it to 2-1.


Meanwhile, Odion Ighalo could not help the Red Devils get a foothold back into the game after replacing Tim Fosu-Mensah in the 81st minute.
Emmanuel Chinaza
Photo Credit : cpfc.co.uk
Copyright ANS