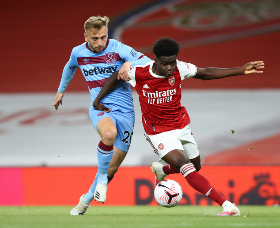 Arsenal have maximum points from their first two games of the new Premier League season after a hard-fought 2-1 win over West Ham at the Emirates Stadium on Saturday night.
Alexandre Lacazette gave the Gunners the lead in the 25th minute but Mikel Arteta's side were pegged back just before half time when Michail Antonio tapped in, but in the second half Arsenal secured a win through substitute Eddie Nketiah.
Making his first start of the new campaign, Saka was involved in the build-up to both goals with his two defence-splitting passes resulting in goals - first he found Pierre-Emerick Aubameyang whose inviting cross was headed home by Lacazette, then bagged another secondary assist four minutes from time when he found Ceballos who unselfishly squared the ball to Nketiah.
Sky Sports pundit Patrice Evra drooled over the performance of Saka and stressed that the versatile winger deserves a lot of credit for the three points picked up by Arsenal.
"Arsenal have better quality and you can see the last goal they scored, such a great pass from Saka, left-footed, and after Ceballos not being selfish, giving that pass to Nketiah, 2-1.

"Arsenal have better quality and that's what happens in a football game.".
The former Manchester United fullback added : "You have to give lot of credit to Saka because both goals he was involved. He's the third pass man I call it. His pass made the difference."
Nigerian Federation target Saka racked up 12 assists last term, making him Arsenal's top assist provider.
Ifeanyi Emmanuel
Photo Credit : whufc.com
Copyright ANS