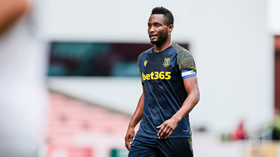 Chelsea legend John Obi Mikel played his first competitive game for Stoke City at the Bet365 Stadium as they suffered a 2-0 loss at the hands of Bristol City on Sunday afternoon, allnigeriasoccer.com reports.
In a 3-5-2 formation, the former Super Eagles skipper played as a holding midfielder alongside Sam Clucas, with Nick Powell slotting in as an attacking midfielder.
It was going okay for Mikel and his teammates until the visitors made a breakthrough two minutes into stoppage time when Nakhi Wells converted on the turn to give the Robins the lead.
Stoke City could not get an equaliser as the game progressed and their misery was compounded when Weimann slotted into the bottom corner to double Bristol City's advantage.
Mikel put in a full shift on his home debut for the Potters, for the second game in a row, having also gone the distance on his competitive debut last weekend at Millwall.
The 33-year-old was rested for Stoke City's Carabao Cup games against Blackpool and Wolverhampton Wanderers and it remains to be seen whether he will play a part against Gillingham on Wednesday.
Igho Kingsley
Photo Credit : stokecityfc.com