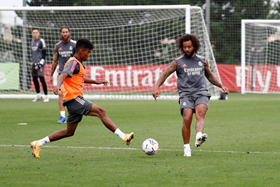 Still just twenty years of age, Nigerian winger Marvin Akinlabi is in the frame to make his competitive debut for Real Madrid's first team in their La Liga opener against Real Sociedad on Sunday evening, allnigeriasoccer.com reports.
Los Blancos coach Zinedine Zidane has included Akinlabi in the matchday squad against The Whites and Blues but he is not in the starting eleven.
If he steps out on to the Reale Arena turf off the bench as a substitute, the Spanish-Nigerian youngster will be wearing the number 28 on the back of his jersey.
Akinlabi is vying with three attack-minded players in Borja Mayoral, Sergio Arribas and Luka Jović should the French football tactician decide to introduce an offensive player off the bench.
A former Spain U19 international, he was assigned the number 20 jersey by Real Madrid Castilla last term and used number 7 in the UEFA Youth League during the 2019-2020 campaign.
Akinlabi played 92.86 percent of Real Madrid Castilla matches over the course of last season.
Igho Kingsley
Photo Credit : realmadrid.com