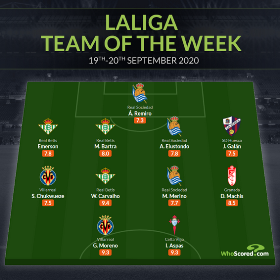 Villarreal winger Samuel Chukwueze has been named to the La Liga Team of the Week by Whoscored.com following the conclusion of the matchday two fixtures.
The Super Eagles star impressed as the Yellow Submarine registered their first win of the season, beating SD Eibar 2-1 with the number 11 providing an assist for the equaliser netted by Gerard Moreno.
In a 4-4-2 formation, Chukwueze lined up alongside William Carvalho (Real Betis), Mikel Merino (Real Sociedad) and Darwin Machis (Granada) in midfield.
The Diamond Academy product completed three take-ons against Eibar, a joint game high figure along with Moreno; made three key passes; played two shots none of which hit the target.
He managed one tackle over the course of 85 minutes he spent on the pitch and was accurate in 63.6 percent of his passes; won one aerial duel and made 39 touches.
Chukwueze is in line to be named in the Nigeria squad for their upcoming friendlies against Ivory and Coast in Austria next month.
Igho Kingsley
Copyright ANS