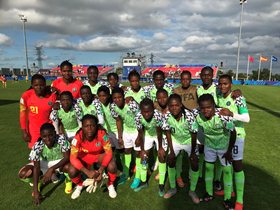 Allnigeriasoccer.com can exclusively report that the Nigeria Football Federation have recommended the appointment of Christopher Danjuma as Head Coach of  Nigeria Women's national U20 football team, Falconets.
As part of his coaching credentials, he holds CAF 'A', 'B' and 'C' licenses as well as NIS Advanced coaching certificate.
Danjuma is one of the most experienced women football coaches at both the domestic scene and national team having won several laurels.
Moses Aduku will be Danjuma's right hand man as he is set to be named assistant coach and the third in the hierarchy of the Falconets coaches to be appointed is Bilkisu Tijjani.
While Adiku has NIS Basic Certificate, NIS Advance Certificate and a CAF 'C' License, Tijjani has been awarded a NIS Basic Certificate and CAF 'C' License.
Charity Nwere Nnedima, who has NIS Basic Certificate, NIS Advance Certificate and CAF 'C' License', is among the assistant coaches and is also tasked with scouting for players.
Audu Yahaya is the goalkeeper trainer; he was formerly with the Super Falcons as goalkeeper coach and presently works with Nasarawa Amazons.
Ifeanyi Emmanuel
Copyright ANS