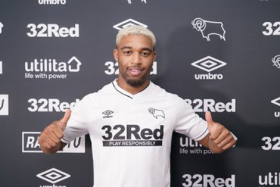 Jordon Ibe has completed his move to Derby County, the Championship club informed via their official website on Tuesday, September 22.
The onetime Nigerian Federation target is returning for a second spell at Derby County having spent a portion of the 2014-15 season on loan at the club during his Liverpool days.
Ibe, who has inked a two-year deal, has joined the Pride Park Stadium outfit as a free agent following his release by Bournemouth in June 2020.
In his first spell at Derby, Ibe impressed with five goals in 24 appearances and had to be recalled by former Liverpool boss Brendan Rodgers.
"It feels terrific to return, I have unfinished business here. The fans were so welcoming the last time I was here and I enjoyed playing at Pride Park," Ibe told Rams TV.

"I remember the fans here; they were like a twelfth man on the pitch for home games and the atmosphere was amazing. I also remember some of the goals I got too.

"I feel like this, coming to Derby, was the best choice for me. I had a great six months here before and I thought it was the best place to come."
Ibe has represented England at Under-18, Under-19, Under-20 and Under-21 level.
Igho Kingsley
Photo Credit : dcfc.co.uk
Copyright ANS