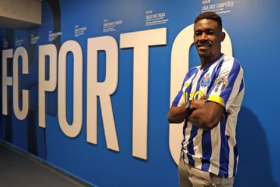 Former Santa Clara coach João Henriques is backing new Super Eagles invitee Zaidu Sanusi to step into the shoes of Porto left-back Alex Telles who is heavily linked with a move to Manchester United before the close of the summer transfer window.

Henriques knows about the qualities of Sanusi,  having coached him last season, and believes the Nigerian is the right player to take over from the offensive Brazilian fullback.
The Portuguese manager noted that Sanusi has to be given time to adapt to his new teammates and Porto's style of play.
In quotes carried by Bancada, Henriques stated : "Zaidu has this capacity. He will need time and space to grow.
"He has to learn because he is in a different reality and requirement. If he is given time and space he will be a very good player to take over from Alex Telles.
"Obviously, he cannot be expected to be an Alex Telles, because he is a mature player with a lot of quality but Zaidu has enormous potential to be a reference player".
Sanusi came off the bench for his competitive debut for Porto in their 3-1 win against Sporting Braga on the opening day of the 2020-2021 season last weekend.
He is one of seven uncapped players named to the latest Super Eagles squad list for their upcoming friendlies against Ivory Coast and Tunisia.
Ifeanyi Emmanuel
Photo Credit : fcporto.pt