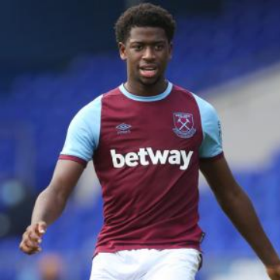 West Ham head coach David Moyes has handed a full debut to teenage Nigeria-eligible central defender Ajibola Alese in his side's third round Carabao Cup clash against Hull City, allnigeriasoccer.com reports.
Born January 17, 2001, Alese is making the Hammers starting lineup for the first time in his career.
The 19-year-old was a non-playing substitute in a 3-0 win against Charlton Athletic in the second round of the Carabao Cup, the first squad involvement for the highly-rated teenager who has captained England at U16 level.
Alese will be wearing the number 42 jersey in this evening's clash at the London Stadium.
He got a taste of first team football last season at Accrington Stanley, playing fifteen games in all competitions with one assist to his name.
Moyes monitored Alese during the pre-season and handed him game time against Ipswich Town in a friendly.
Against the Tigers, the Anglo-Nigerian starts in a four-man defence also featuring Johnson, Issa Diop and Fabian Balbuena.
Igho Kingsley
Photo Credit : whufc.com
Copyright ANS