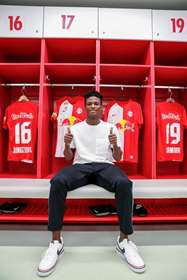 Red Bull Salzburg loanee Samson Tijani has confessed that his maiden invitation to the Super Eagles for their upcoming friendlies against Ivory Coast and Tunisia came as a surprise, and has claimed that he did not have any contact with manager Gernot Rohr and his assistants in the days leading up to the squad announcement.
However, the former Golden Eaglets skipper has revealed that the Franco-German football tactician assured him and other Nigeria U17 stars last year that there was a pathway into the Super Eagles if they keep doing well.
Tijani has jumped two age groups - Flying Eagles and Olympic Eagles - following his first call-up to the Super Eagles and after only four matches as a professional and 322 minutes under his belt.
"I feel good about being invited but I didn't expect the call-up because I just moved to Europe," Tijani told allnigeriasoccer.com.
"It was amazing when I came to Europe, I didn't even play in the academy, went directly to the first team.
"When I was sent on loan, I went straight to the starting lineup, I have played all the games. It is amazing starting all the four matches, thank God for everything".
The TSV Hartberg defensive midfielder added : "Everything is step by step, when I get to camp things will be good, I did not even know the coach was going to invite me.
"Rohr came to the camp when we were preparing for the Africa U17 Cup of Nations, he watched me and the other players, said I'm doing good but I'm still a kid and he'll be monitoring the good players."
Tijani immediately called his mother as soon as his invitation to the Super Eagles was confirmed by the Nigeria Football Federation.
"I called my mother first to inform her of the good news about my call-up but she didn't understand the meaning so I had to break it down for her. She was happy and thanked God for everything," concluded Tijani.
The 18-year-old Tijani is battling more experienced players such as Oghenekaro Etebo, Mikel Agu and Frank Onyeka for one of the starting spots in central midfield in the friendlies with Ivory Coast and Tunisia next month.
Ifeanyi Emmanuel
Copyright ANS