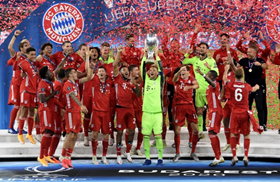 Champions League holders Bayern Munich continued their incredible winning run - 23 successive wins - but needed extra time to clinch victory against Sevilla in the UEFA Super Cup on Thursday night, allnigeriasoccer.com reports.
Apart from lifting the Cup, Bayern will earn five million euros in prize money for beating their Spanish opponents.
Two players of Nigerian descent in striker Joshua Zirkzee and attacking midfielder Jamal Musiala made Bayern's 23-man matchday squad but were not utilised off the bench.
Coach of the Bavarians, Hans-Dieter Flick picked Robert Lewandowski over Zirkzee to lead the attack while
Serge Gnabry, Thomas Mueller and Leroy Sane made it to the starting lineup ahead of Musiala.
Bayern Munich were made to work for their victory and went behind in the 13th minute, Lucas Ocampos converting a spot kick after David Alaba's foul on Ivan Rakitic but Leon Goretzka slotted into the far corner in the 34th minute to make it 1-1.
Javi Martínez, off the bench in the 99th minute, headed home the winner at the end of first half extra time after Alaba's effort was parried by the goalkeeper.
Both Zirkzee and Musiala featured off the bench in Bayern's season opener vs Schalke 04, with the Chelsea Academy product becoming the youngest player to score for the Munich side in the Bundesliga after finding the net in the 81st minute.
Ifeanyi Emmanuel
Photo Credit : fcbayern.com
Copyright ANS