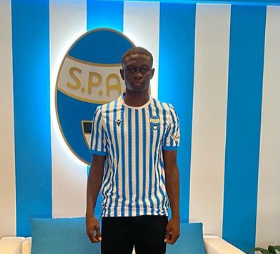 Italian Serie B club SPAL pulled off a transfer coup with the signing of promising London-born Nigerian youngster Abdulmalik Justin Owolabi-Belewu this month.
Predominantly a central defender now, the 18-year-old revealed that he models his game after Sergio Ramos and went on to highlight the qualities of the legendary Real Madrid center back.
"I try to model my game after Sergio Ramos. I used to hate him but when I became a defender I realized how special he is as a player," Belewu told allnigeriasoccer.com.
"On the pitch he battles physically which is something I try to do but he is also very very good on the ball. He’s also a cut above the rest mentally."
Belewu started off his career as an attacker but was converted into a central defender when he moved to Toronto FC.
His debut goal for SPAL against Genoa last weekend was a poacher's finish, firing home a rebound after the initial effort was parried.
On his best position, he clarified : "I started off as a striker and that for me will always be my favourite position as scoring goals is something I’ve always loved to do, even till now.
"However, in terms of playing football at the next level playing centre back is the best position for me. "
Belewu impressed again as SPAL registered their first win of the season in all competitions, beating Sassuolo 2-1 in the first round of the Coppa Italia Primavera on Wednesday, September 23.
Ifeanyi Emmanuel
Copyright ANS