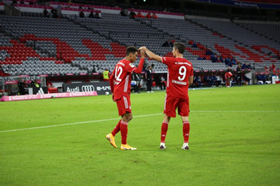 Andrew Martin, Director of Football at Whitgift, a school based in south London has claimed that former Chelsea attacking midfielder Jamal Musiala has made a decision on the country to represent internationally.
Martin coached Musiala for three years between 2013 and 2016 and has tipped the Bayern Munich teenager to take the football world by storm.
Exactly a week ago, the promising midfielder became the youngest ever player to score for Bayern Munich in the Bundesliga, aged 17 years and 205 days, beating the record previously held by Roque Santa Cruz (18 years, 12 days).
Born in Stuttgart to a German mother and Nigerian father, Musiala is eligible to represent Germany, Nigeria and England but he is up for grabs as his appearances for the German and English youth teams came in non-binding friendly matches.
On the international future of his former pupil Musiala, Martin told Deutsche Welle : "England has been his preference over Germany, and it appears that is still the case.
"He grew up as a footballer at Chelsea, and there he played with many other English players, so he's always felt more comfortable playing for England.
"When he played for Germany, he felt like an outsider purely because he wasn't on that circuit and he didn't know any of the boys."
Musiala became the youngest player to represent Bayern Munich in the Bundesliga when he made his first team debut against Freiburg on matchday 33 last season, aged 17 years and 115 days.
Igho Kingsley
Photo Credit : fcbayern.com