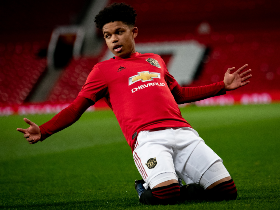 Legendary Manchester United striker Dwight Yorke was in attendance as the Red Devils suffered a 5-3 loss at the hands of fierce rivals Liverpool in a thrilling Premier League 2 clash at the Leigh Sports Village Stadium on Friday evening, allnigeriasoccer.com reports.
With several players heading out on loan to further their development, talented Nigeria-eligible striker Shola Shoretire has been moved up to the development squad and made his debut off the bench for the age group in the Premier League 2 fixture against Leicester City on September 14.
Still only 16, he is one of the youngest players to start a game at this level following his inclusion in the starting lineup against Liverpool today.
However, it was a full debut to forget for Shoretire and it has nothing to do with the loss as he received his first red card in an official match for Manchester United just past the hour mark.
He was dismissed by referee David Richardson after he came to the defence of Dishon Bernard, who was badly tackled by Clarkson.
Leighton Clarkson, Ben Woodburn, Jack Bearne (2) and Luis Longstaff were on target for the visiting team while Elanga , Hannibal and McCann found the net for United.
Ifeanyi Emmanuel
Photo Credit : manutd.com
Copyright ANS