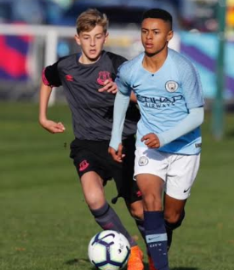 Tai Sodje, nephew of retired Nigeria international Sam Sodje, scored his first competitive hat-trick for Manchester City U18s to inspire the young Citizens to a 3-1 win over Liverpool in the U18 Premier League on Saturday afternoon, allnigeriasoccer.com reports.

Sodje has started the season in a rich vein of form, scoring in back-to-back games against Wolverhampton Wanderers and Everton prior to today's contest at the Academy ground.

The visitors took the lead through the Anglo-Nigerian striker who finished from close range in the 34th minute.

Sodje claimed his second of the afternoon ten minutes after the restart following a defensive error by the hosts.

And on 68 minutes, Liverpool's hopes of a comeback ended when Sodje bagged his treble after a brilliant counterattacking move by Manchester City.

Renowned for his goalscoring prowess, trickery and pace, he has gone the distance in all the matches contested by Manchester City in the U18 Premier League in the new season.

Sodje made a big impression for Manchester City U16s last season and was rewarded with a scholarship deal ahead of the 2020-2021 campaign.