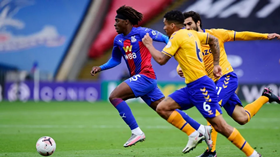 Allnigeriasoccer.com's round-up of Nigerian players that were in action for their respective clubs in the English Premier League on Saturday, September 26.


Nigerian players with dual nationalities and have played competitively for the senior national teams of other countries have been omitted.
In the early kickoff at the American Express Community Stadium, former Nigeria international Odion Ighalo missed out on Manchester United's matchday squad for the first time since his arrival in England as Ole Gunnar Solskjær's team defeated Brighton & Hove 3-2.
Bruno Fernandes scored from the spot deep into stoppage time to secure United their first win of the new season.
Neal Maupay opened the scoring from the spot in the 40th minute but Marcus Rashford and an own goal from Lewis Dunk put the visitors 2-1 up, before Solly March restored parity in the fifth minute of second half stoppage time.
At Selhurst Park in London, there was a full Premier League debut for Eberechi Eze as Crystal Palace dropped points for the first time this season, losing 2-1 to Everton, for whom Alex Iwobi came on as a substitute in the 86th minute.
Dominic Calvert-Lewin gave the Toffees the lead at minute 10, Cheikhou Kouyate restored parity for the Eagles on 26 minutes, before Richarlison scored what proved to be the winning goal five minutes before halftime.
Eze lasted 75 minutes on the pitch in his first start for Crystal Palace in the top-flight.
In a six-goal thriller at the Hawthorns, Super Eagles center back Semi Ajayi put in a 90-minute shift as West Brom and Chelsea shared the spoils with a 3-3 draw.
It looked almost impossible for Frank Lampard's team to get anything from this game after the Baggies went 3-0 up through goals from Callum Robinson (2) and Kyle Bartley inside 27 minutes but in a game of two halves, Mason Mount, Callum Hudson-Odoi and Tammy Abraham scored to salvage a draw for the Londoners.
In the late kickoff, Nathan Tella was named in Southampton's 18 against Burnley at Turf Moor. The Saints were leading 1-0 at half-time thanks to Danny Ings' early opener.
Igho Kingsley
Photo Credit : cpfc.co.uk
Copyright ANS