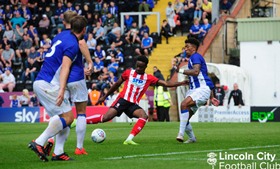 Allnigeriasoccer.com understands that Championship club Reading have passed up the opportunity to sign talented Nigerian youngster Jordan Adebayo-Smith.
The California-born striker recently returned to his club Lincoln City after training with the Royals for four weeks with a view to signing a contract.
Reading U23 coaches ran the rule over Adebayo-Smith for the last time in the Premier League 2 Division 2 win against Aston Villa at Bodymoor Heath Training Ground on Friday night and he was informed after the match he won't be offered a contract.
Since joining Lincoln City in 2018, the dual-eligible striker has been farmed out on loan to non-league clubs
Grantham Town, Boston United and Gainsborough Trinity to get a taste of first team football.
Adebayo Smith's best moment in a Lincoln City shirt was netting a hat-trick against South Shields in the FA Youth Cup back in the 2018-2019 season.
The 19-year-old made his professional debut for the Imps in an EFL Trophy clash against Accrington Stanley in December 2018 and has been included in matchday squads for League One and League Two fixtures.
Ifeanyi Emmanuel
Photo Credit : weareimps.com
Copyright ANS