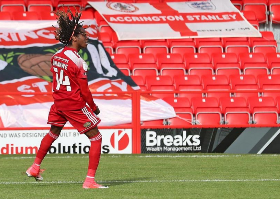 Chelsea loanee Tariq Uwakwe missed out on the matchday 18 as Accrington Stanley suffered a 4-1 loss at the hands of Oxford United in the League One on Saturday afternoon, allnigeriasoccer.com reports.
The versatile left-footed midfielder was not selected by manager John Coleman for the visit of Oxford United due to injury and was on the sidelines watching his teammates lose.
Uwakwe has thrived since joining Accrington Stanley on a season-long loan around three weeks ago, starting and completing each of the first three games played by the Reds prior to yesterday's game at Wham Stadium.
If he had featured vs Oxford United, he would have gone into the game on a streak of red-hot form.
The Anglo-Nigerian's fifth minute opener in a 7-0 win vs Leeds United in the EFL Trophy was the first of four goals he has notched since completing his loan move.
Accrington Stanley's next game comes up against AFC Wimbledon on October 3 and it remains to be seen whether Uwakwe will be available for selection.
The 20-year-old has been on the books of Chelsea since U9 level.
Igho Kingsley
Copyright ANS